Navalny--a hero for our times 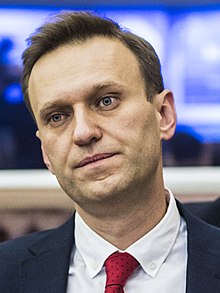 Before history buries the exploits of one man I want to give a bit of my memory.  A CNN special seen for a second time prompted this blog. Plus some unsettling news that in prison Alexei Navalny was ill and not receiving adequate medical attention.

Putin is upset that the Russian Empire has been dismantled.  He wants to control more people  His action against dissidents is despicable.  The admiration of other authoritarian leaders including Donald Trump reflects poorly on them.

Contrast the British Empire and to a lesser extent Francophonie.  Certainly they exploited huge sections of the world they were able to conquer.  Both European powers had developed  democratic structures.  Both Empires were dismantled for economic factors, but have maintained significant cultural and economic ties.

The evidence against the Putin regime is circumstantial, but pretty overwhelming.  Novichok has been identified as the poisoning agent used twice against Navalny as well against two former Russians in Salisbury and who knows how many others.  It supposedly cannot be traced after a few hours in the blood of its victims. It is only manufactured at one location in Moscow under the supervision of specialist scientists.  Additional evidence comes from travel records of the scientists who seem to coincide with travel plans of Navalny.

In the film after gathering information that points to specific people Navalny himself using the name of a higher authority contacts the agents identified  on the pretense of analyzing what went wrong in their efforts to kill him.  He is able to get a description of their procedures including destroying his clothing that contained traces of Novichok.  There is also despair that by bad luck he got away.

Why all the fuss over one man?   He had the effrontery to accuse Putin of being crook in the Russian public.  Furthermore drawing support from Russians.  He also had the gall to return to Russia after his first poisoning.   He is now in prison and apparently not receiving adequate medical attention.

Navalny is also part Ukrainian and used to visit a grandmother in Ukraine that enabled to also speak Ukrainian.  He seems very articulate in English as well.  Naturally he has expressed an opinion opposed to the unjustified Ukrainian invasion.

His sense of humor (sometimes admittedly black sometimes).  One can hope that Russian people will rise up and heed Navalny's guidance.  Nelson Mandela overcame efforts to bring freedom to all South Africans.

His wife  Yulia Navalnaya and daughter Daria or (Dasha) Navalnaya are both articulate and supportive.