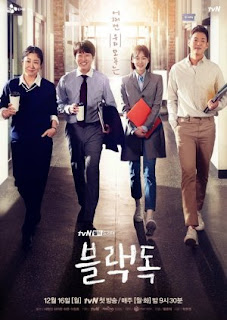 Some baggage I carry into this post about "Black Dog Being a Teacher" (2019).  Several years ago I read about the intensity of Korean education.  One fact got my attention:  books were published for parents to help their children with specific subjects.  Here in North America it would be pretty rare for parents to spend more than token support for homework except to insist they do it.  In the 1950's Koreans were poor, but recognized that education was critical to improve their standard of living.  Parents made sacrifices so their children could go to the better schools.  They are a good model for the importance of education.

The title "Black Dog" comes from a child hood memory when looking for a dog with her grandfather the young protagonist let him pick out a cute white puppy and she felt a little uneasy about a black puppy that wagged its tail, but seemed to be overlooked.  In Korea it is common for the lighter colored dogs to be picked ahead of black ones.

This series has basically no romance so the focus is on the education environment.   Plot revolves around parents, students and teachers.  Different views on education are depicted.

The story starts with a tragic accident occurring during a school trip.  There is a collision in a tunnel and most of the students and teachers escape while one young girl is stuck.  Another teacher realizes someone is missing and goes back to get her out and although successful dies in the aftermath.  It turns out the teacher was only a temporary one and his family is not compensated like a permanent teacher would have.  The young girl, Go Ha-neul  is so grateful that she decides she wants to be a teacher and help others.  She begins as a temporary teacher at a private high school, meaning  precarious job security.

Purpose of this particular school, Daechi High School is to help students get to higher education.   The competition is intense, not just for the students, but also for the high schools and also the teachers.  Go Ha-neul is given support by an experienced teacher, Park Seong-soon.

We see the teachers not just teaching, but also involved in administration decisions.  Not only are the students evaluated, but also the teachers.  Records are very important in evaluations.  Students are measured not just on marks, but also subjectively on extra curricular activities.  Teachers are evaluated at least partially on their students.  It was remarked that it is a lot easier and more fun to teach intelligent motivated students.

Parents are focused on admission tests for university and that in turn forces teachers to focus on what is expected.  Administration is focused on getting more students to the more prestigious colleges.

Go Ha-neul becomes very concerned about her students, in particular one girl who is hard working, but from a poorer family.  One of her rivals is a boy from a better off family and they seem to be squabbling much of the time.  Go Ha-neul feels she could develop a class for the more gifted chances to enhance their chances of  achieving their university goals.  She offers to do some of the extra work involved and convinces a few others to get involved.  Her efforts succeed and she is acknowledged as critical to the success.

However there is resentment.  Some students feel they have been overlooked and a small number do some vandalizing.  When finally confronted they try to justify themselves.  Go Ha-neul realizes there is truth to their resentment and makes a decision not to run the gifted program.

One student symbolizes another view of education.  Hwang Bo Tang had not been noticed, but Go learned he had an unfortunate misunderstanding with Park Seong-soon a year or so ago.  Eventually that was cleared up, but Hwang enjoyed drawing and photography more than any school subjects.  He saw himself going to school to learn web-tooning.  Go finally accepted his decision and vowed to keep in touch.

Every activity seems tied to politics.  Education is no different.  Bureaucracy lends itself to politics.  School scheduling for classes and meetings, and downtime are affeced by staffing.  I remember one semester not having any classes on a Friday (only partly by my design).  We tend to think of education stories as classroom battles, but there are many struggles for power behind the scene that affect the main purpose.

There is a lot of debate over small points, much of which deteriorates to quibbling as part of a power struggle.  One example:  on a test question affecting university admission some classes were taught about "lexical ambiguity" and interpreted one question referring to a banana as person rather than a fruit in a arithmatical question--after one discussion it has been decided the answers should only be interpreted how the subject matter had been taught, overlooking the one teacher who had to be reminded that interpretation can be critical.   Some students interpreted that some kids got special treatment.

'In their last episode, the staff of Daechi High School explore going beyond the CSAT exam preparation which some are still worried about other relevant information..

Parents want to protect the interests of their children.  Parents also have their own opinions that they want respected.  High authorities have concerns.  A current controversy is about critical race theory which supposedly is only taught at American legal colleges, but is being used as political weapon.  To an outside observer the real issue is should we be teaching true history as it affects everyone or not.

Honoring some of those who contributed to the result of "Black Dog Being a Teacher" and n the expectation that some will likely appear in the future here are some worthy contributors:

Hyeon-jin Seo plays the lead character Go Ha-neul, a beginning teacher.   She had established herself in earlier roles.  In 2019 she with a fellow actor were made ambassadors of the National Tax Service for Korea;

Ra Mi Ran played Park Seong-soon.  One of her film credits was for "Hope" (2018)    http://www.therealjohndavidson.com/2016/11/hope-gut-wrenching-film-from-korea.html

Jung Taek-Hyun played Hwang Bo Tang the student who dropped out.  His film credits include "Forgotten" (2017) and "Flower of Evil" (2020).   Check http://www.therealjohndavidson.com/2022/10/flower-of-evil.html

Education is a tough slog and some people who aren't especially interested in education may find this slow.  If you are interested in some of the issues that all education systems wrestle with this is worth your time.  It has its share of character and plot.