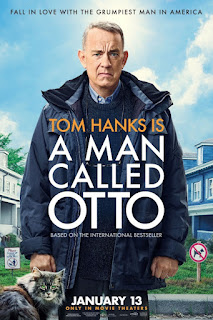 Tom Hanks is a well respected film maker and was smart enough to remake an enjoyable Swedish film, "A Man Called Ove" (2015).  Remakes are tested and generally able to find an audience.   The Americans do a great job, even updating a few elements and adapting to the American market.  http://www.therealjohndavidson.com/2017/07/a-man-called-ove.html  Film makers are anxious to get us back into theatres where they can display their talent and technology.  They still raise the needle of our enjoyment.

The basic story is about a grumpy old man who is distraught over his wife's death.  He calls most of his acquaintances "idiots".  His new neighbors including an immigrant woman and her native husband are annoying and they get off on the wrong foot.  But the immigrant is persistent and gives him some of her native food as a gift.  He ignore the gift for awhile, but gives into his hunger is finds it very tasty

One character we might expect Otto to belittle would be transgender.  The transgender male, Malcolm had delivered a paper to Otto, but first he explained that Ottos' wife Sonya had been his teacher and had been kind to him.  Otto showed no hesitation in accepting Malcolm and included him in future interactions.

Both films used attitudes towards cars to differentiate people.  The conservative self righteous Ove or Otto made judgments.   In Sweden, Ove was a supporter of Saab while his friend was always buying a Volvo.  In America the choice was Chevrolet vs Ford, but the worst folly in Otto's eyes was imported cars such as Toyota and Volkswagen.  My father  who drove for a living and had won Car rallies told me that the best car he ever drove was a Saab.

Both films depict immigrants as life enhancers for the rest of us.  In the Swedish version they were able to enlist a trained actress from Iran.  The Americans who seem to be concerned about too many Mexicans crossing the border are confronted with a Mexican who adds spice to life.

A great cast and crew put together a worthy remake.

Rita Wilson, also shared producing duties and in addition helped write and sing one of the songs.  She started acting with an episode of "The Brady Bunch"  (1972).  She acted in various tv shows, and after two appearances in films with Tom Hanks, started dating and married in 1988 with a Greek wedding.  She produced "My Big Fat Greek Wedding" (2002) having helped the lead actress and script writer Nia Vardalos the contract becoming a huge money maker.  She starting recording songs in 2012 including songs she wrote.  Her film credits include:  "Sleepless in Seattle" (1993), "Larry Crowne" (2011) and six episodes of "The Good Wife" (2011-2014).

Marc Forster, the director and executive producer had been born in Germany, but raised in Switzerland,   He attended the New York University to study film.  He directed Halle Berry to an Oscar in "Monster's Ball" (2001).   His film credits include "Stranger than Fiction" (2006) and "The Kite Runner" (2007).

Fredrik Backman, a favorite writer from Sweden wrote the original book "A Man Called Ove"  He was a film producer for another of his books "Anxious People" (2021).  A post for his latest book with links to his other books:  http://www.therealjohndavidson.com/2022/11/the-winners.html:

Mariana Trevino played Marisol, the Mexican immigrant that coaxed Otto into a more relaxed lifestyle.  She has been in over 30 films, mostly in Spanish and from Mexico.

Much as I admire Tom Hanks I feel that Rolf Lassgard is the more credible not only as a grumpy old man  but as a jovial bumpkin.  In my favorite film, "After the Wedding" (2006) he was also very credible as fast talking business man.  A Swedish native, Rolf has performed in Danish and Norwegian.  Rolf also played Wallander in the tv. series that has been adapted in other nations.

Bahar Pars plays the persistent neighbor who opens up Ove.  She was born in Iran and her family moved to Sweden after the Iran Iraq War.  She trained to be an actress who who has performed on stage, television and films.

Ida Engvoll played Sonja, the wife seen only in flashbacks.  Ida's film credits include "The Bridge" (2015) and as the lead character for "Rebecka Martinsson" .

Remakes of movies are a recognition of something worth viewing.  If you enjoyed either one you will not be disappointed if you get a chance to watch the other.  Tom Hanks is a strong indicator of something worth watching.  The Swedes have a long film tradition that has enriched the world and their film is a good example.