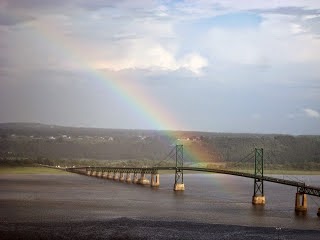 My father was a truck driver and a champion car rally driver, but it made it difficult for me to learn to drive.   I was very intimidated by his expectations.  Never learned to drive a stick shift, but did finally get my licence at age 18 thanks to high school driver ed at Haliburton Highlands Secondary School.  More on my father at http://www.therealjohndavidson.com/2012/06/remembering-my-father.html

After graduating from university the job market didn't click for me.  In some ways I was very naive and thought prospective employers would jump at the opportunity to channel my brains and my charm, but for a very long time nothing clicked.  My parents were in despair, but finally I hit on the idea of being a social worker.

Somehow my qualifications did send the right message.  The one obstacle was that a car was required.  My parents saw that as an opportunity to get me to fly out of the nest and arranged for me to get a car and the necessary insurance.  Elsewhere I have recounted that the job only lasted six months and that I learned about how a car's value can depreciate more than the principle declines.  One of the more valuable lessons learned.  Another was driving to Wasaga Beach and Midland, places that I dragged my future wife and later my family to.

Here I was stuck with a car and payments and no job.  But the car it turned out was an asset.  Six months later I landed my second full time job and a car was a necessity.  I ended up living in Burlington with a sister and traveling on the job all over the Niagara Peninsula

Met my wife due to a series of weird chances.  Came home early on my birthday with the intention of watching my alma mater, University of Guelph play basketball on tv game of the week.  Tv didn't work and on impulse (actually thought birthday a big disappointment) drove to Guelph, about 40 minutes away and leanred game had been played the nite before.  Making the best of bad luck I called on some old friends and eventually ended going on a blind date with my future wife.  How I met my wife:  http://www.therealjohndavidson.com/2012/08/how-i-met-my-wife.html

At least two fascinating things got my attention on the job.  One was the Welland Canal tunnel and the other was Niagara-on-the Lake.  I felt compelled to take my future wife and surprisingly she hadn't seen either.   Doing a little bit of calculation I managed to work in the Fort Erie area and drive over to Buffalo to watch a basketball game.  This escalated my interest in basketball which led to further escalations described in another blog.  Basketball led me on some interesting adventures:  http://www.therealjohndavidson.com/2015/02/my-basketball-projects-part-one.html

I learned of a job from one of the people I investigated that sounded ideal--I was a big newspaper reader and had enjoyed working with young people--circulation.  My car again was an asset--supervising youngsters and collecting their money spent years doing it--taking a car load out canvassing (borrowed wife's bigger older car to win prize).  A bit more on how I won a contest with family help:  http://www.therealjohndavidson.com/2011/02/memorable-vacation.html

I worked for several newspapers and eventually ended up as a traveling salesmen selling a variety of things described elsewhere.    This meant even more driving and more opportunities.  At this time I was enjoying the best of big cities (Toronto, later Montreal), middle sized cities, small towns and rural areas.  My personality had got the best results in rural areas but big cities had a variety of things I became mesmerized with.

My daughter, Heather decided to focus on journalism in King's College in Halifax--with my newspaper circulation background I tried to talk her out of it, but in the end respected her choice.  neither of us had ever been to the Maritimes so it seemed unnecessarily far away. I had been pretty much centred on where I lived (Oshawa, Haliburton) and Guelph, but was pleased my daughter could expand her horizons. At this time I was selling a product that was pretty much out of someone's garage, but I had the freedom to sell it anywhere in Canada.  This opened up new doors and I ended up selling in the Maritimes and Quebec.  I fell in love with Ile d'Orleans and my wife and I vacationed there and different parts of Nova Scotia where we also vacationed, Oak Island, Yarmouth, Wolfeville.  Before cars most of us lived relatively provincial lives.  People are the same everywhere, but they are also unique.  Always found new pastures fascinating.

On one Easter weekend I had planned to travel to Halifax to pick up Heather and make some sales calls   My car stalled and was going to require major repairs.  I was encouraged to rent a car, everything seemed closed, except the airport.  The most powerful car to date and it gave me a another level of freedom (or feeling powerful)

Another Maritime pickup my glasses broke--Heather ended up driving through rush hour Halifax, Montreal and Toronto on a learner's permit--helped her get her licence--worked out good for me--while she drove I could map out where to go and get rested  (she was already a capable driver)

I remember driving to the Maritimes and meeting people I had met at trade shows back in Ontario. Why would they do that?  Ironically they wanted to meet sales people to learn and didn't meet enough at their remote location.  I found I was appreciated a lot more in such areas.

Lately not drive so much--one delivery run for The Rider as one way to alleviate cash flow, but also to seek out new prospects and speed up advertiser response  plus also a little private shopping

At my father's funeral I was struck with my sister Rebecca's eulogy.  Amongst many other details she mentioned that my father loved visiting different places and taking different routes.  It seems that gene was inherited.  Furthermore my son Michael has taken it a step further and has been in several countries in Europe, Asia and Africa and now resides in New Zealand.  On a recent visit I was struck how at home he is driving on the left hand side of the road.

Freedom is a big topic and driving is only one factor.  Our ancestors were very limited in where they could go and how fast.   If you were rich you had less restrictions, but even they could go no further than a horse could take them.  So in one sense anyone with a car has more freedom than the richest person two hundred years ago.

What's to like?--no supervisor over your shoulder--listening to radio I learned where I could hit a CBC or NPR station almost anywhere.  I also listened to a variety of  tapes, some self improvement, bu also entertainment and then moving with the times to  CD.  Seeing interesting places (all places are interesting partly inversely to how familiar you are with them)--open up opportunities (wholesalers in Maritimes, Quebec)--interesting challenges such as when I decided I could make sales calls on francophones although my French skills were pathetic.  Some travel adventures can be read at: http://www.therealjohndavidson.com/2012/07/travels-of-salesman-part-3-quebec.html to Quebec; in the Maritimes http://www.therealjohndavidson.com/2012/07/travels-of-salesman-part-two-maritimes.html ands in Ontario, http://www.therealjohndavidson.com/2012/06/travels-of-salesman-part-1-ontario.html

What's not to like?--Although access to a car got my career started I often wondered if I gave up opportunities that might have paid more, but did not have the advantages of driving. Driving can be expensive, unless you have a company car or a generous expense account.   For a brief time I did have a company car and have had reasonable expenses most of the time supplemented by Revenue Canada deductions.  Garage time at one stage was disruptive and time consuming.  I normally spent 10+ hours away from home or between motels, often longer.  I considered driving a perk of the job--there always seemed to be somebody willing to let me drive at my expense while they paid a commission.

Despite the current situation it seems likely the price of gas and other operating costs are going to increase to the point where fewer traveling sales jobs can be justified.  Email and the internet have given many a more practical alternative.  The future is probably more mass transit, more electronic communication, maybe more air travel for vacations.  Climate change was not a concern for most of my career and I feel a bit guilty that I was able to take advantage of the lesser awareness.

Photo story:  The Bridge to Ile D'Orleans.  I had overshot a sales call which resulted in my first view of Ile d'Orleans which in turn led to two enjoyable vacations illustrating to me the freedom of driving.
Posted by John F Davidson at 12:05 PM