For a change I did not wait for the new year to begin sorting out what I remember of the previous year.  You can skim through it, even just look at the photos or you can link up to get more details of whatever strikes your fancy.  As usual there is a mix of good and bad.  I will not dwell too much on the bad.  While you read through the obituaries you can look to the left for my favorite highlight.  Starting off with our losses might seem depressing, but we can then better appreciate how much we can be grateful for.

It is sad to think of the people who affected our lives who died.  We lost a number of people important to us.  I would like to remember how they added to our lives.

Ellen "Nel" Drake, mother to good friends Barb and Josie.  I am reminded of her when washing dishes as she knitted some unique dish cloths, but she left much more than that.  At a memorial ceremony where relatives came up from South Carolina I learned a few more things.

Audrey Linke, mother of good friend Debbie and hostess to a few events I remember

Ron Graham, married to Judy Graham (maid of honour at our wedding) and father to two terrific women.

Steve Skerrett, married to Debbie, both of whom were friends since elementary grades of Sharon
Eugene Fedak, a retired judge married to Grace, the sister of my late father in law, Boris Olynyk. He was host to a number of Ukrainian Christmases and family functions I enjoyed.  Also very importantly was father to Mark and Catherine.  One other thing I remember is that with some of his brothers in law he was a versatile musician.

Peter Worthington at one time was a hero of mine.  As a newspaper carrier for the Toronto Telegram I often read headline stories following him around the world.    http://www.therealjohndavidson.com/2013/05/peter-worthington-was-boyhood-idol-of.html

These are all losses, but also occasions to reflect on what is most important in life and what some people and animals have given us.  It is not possible to do full justice to every person or event and my failings can be at least partially attributed to my poor memory.

Early in the year I discovered the Human Library.  We go to the library to learn things and to be entertained, but really most of it is second hand.  With the Human Library you get a first hand experience meeting with real people who are illuminating role models.  The Hamilton Public Library was one of the participants.  I met a famous author (a Canada Reads winner) and a woman who helped found a horse rehabilitation association.   http://www.therealjohndavidson.com/2013/01/the-human-library-and-human-carnivore.html

Cuba had provided us with an enjoyable holiday experiences three times previous and although we are always looking for new experiences we went for a 4th time.   We were surprised to be given silver wristbands in recognition of our loyalty.  There are always new experiences.  I discovered some caves with a guided tour.  Hop on buses made going into town a lot easier.  I went sailing for the first time.  Visited Josone Park for the second time, but discovered a few new features.  We had a small problem and ended up with a credit that led to our 2nd vacation http://www.therealjohndavidson.com/2013/03/my-silver-wrist-band-visit-to-cuba.html would recommend Cuba to anyone and although the beaches are great, get out of the resorts to see the real Cuba--Havana is a very positive experience.

Can-Am in new location Orangeville.  They actually underestimated the crowds and had problems the first day providing food and other services.  Most visitors were impressed with the seminars, shows and even us exhibitors.  Met some of my advertisers and a few new prospects.

In March enjoyed Burlington Eagles Gala where they show their appreciation for volunteers and sponsors.  I am pleased to have played a small role in another of their record setting (273,000 pounds) food drive, they call the Gift of Giving Back.

Through my daughter I was aware of Moxie Fruvous and later as a regular CBC listener I was aware of Jian Ghomeshi.   The Hamilton Public Library was able invite Jian for a book promotion.   A wonderful nite out for my wife and me.  http://www.therealjohndavidson.com/2013/04/a-jian-ghomeshi-encounter.htmlone of my most popular blog posts. 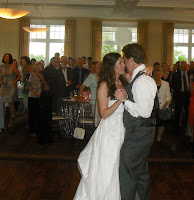 Doors Open Hamilton has become an annual tradition.  This year just walked, but saw a lot of buildings with interesting histories.

David, a nephew married Krista who we had met a few years prior.   The bride and her mother are both wedding planners, so you expect a good time and it was delivered--met a few relatives not seen for awhile.   David surprised Krista with a song--he doesn't have a musical background, but did have a friend who agreed to help him do a particular song.  I work only a few doors away so got to hear the secret rehearsals.  From crude beginnings I could hear it shape up better and better all the time.  His ushers took part in the  presentation.

New Zealand was not a place I ever fantasized about, but my son Michael had a fascination with it and when between teaching jobs really took a chance and without knowing anyone he traveled there and applied for a job.  I can now appreciate that he made a very good choice.  For Sharon and I it was literally a trip of a lifetime, not just because of what we saw, but because of the family nature of it.  It has been many years since we dragged Michael and his sister Heather on our idea of a vacation, but this time we shared in Michael's idea.  Not that we didn't have a lot of freedom to pursue our own fancies, but that once he understood our interests he helped direct us and very often took us.  We met Laura his girl friend and she was very supportive of our vacation, driving us on her own to several locations while Michael worked.  On our second week, the four of us took a 1600 kilometer trip around the North Island that has left a lot of memories. 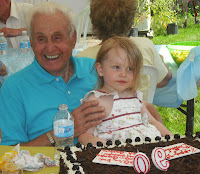 Peter married my mother in law, Florence some 15 years ago and has really added something to the family.  We celebrated his 90th birthday with friends and relatives.  More about Peter:  http://www.therealjohndavidson.com/2013/06/peter-is-still-kicking-at-90.html

I was familiar with the Fringe Festival, but had never attended one. This year Heather got involved with her friend Stephanie Lampman.  For me a weird topic -Zombies.  When we handed in our tickets we bought a plastic rain coat.  We had been warned that blood would be spurting into the audience.  The play actually won an award.  --after this I became aware I had met with Heather's friend, Stephanie years ago at a networking meeting.

The Art Crawl held the second Friday of each month is an event I managed to attend most months.  It is expanding in exhibitors, music and restaurants.  http://www.therealjohndavidson.com/2013/08/james-st-north-art-crawl-is-progressing.html

The Supercrawl has been getting better and better every year.  Within easy walking distance.  --each year progresses in one way or another  http://www.therealjohndavidson.com/2013/09/hamiltons-fifth-supercrawl.html

I spend a lot of time reading.  This year I shifted to a greater emphasis on fiction books  I love finding a book that really engages me.  That is a very personal process, but you might enjoy going over my list of favorites to explore some possibilities.  Many of my choices came from investigating various lists and listening to suggestions by others. http://www.therealjohndavidson.com/2013/12/books-that-impacted-me-in-2013.html

Movies are condensed stories with special effects.  We are all a little different in what we enjoy, but often are limited by what we are aware of.  Again I have benefited from the ideas of others and offer my experience for you to consider for your own pursuit of enjoyment.  From over 246 movies here is my year end review, http://www.therealjohndavidson.com/2013/12/movies-worth-sharing-from-2013.html

As I get older I appreciate the arts more and consider food as art.  Some satisfying and memoroable restaurant visits were to Sokratis, 2 picks by Heather,  Rapscallion and Memphis Fire BBQ, Wild Orchid, Acclamation, Jack and Lois, Culantro Peruvian Cookery, Ben Thanh.   In New Zealand Beijing Duck and Delicious in Auckland, Thai Restaurant in Rotorua, Kristi's Cafe in Whanganui, in Shannon.  In Cuba restaurants, a few of the fixed menu restaurants were noteworthy, Natura and La Galena.  A few new discoveries were Kiwi meat pies, Turkish, Maylaysian,  and lamb on our trip to New Zealand.

Christmas holidays were special as Michael came from New Zealand.  Went to a Raptor game and they won scoring over 100 points (i.e. free pizza slice).  We went to Wayne Gretzky's restaurant, one of the few restaurants where you can order perogies and curried lamb burger (both were delicious).

OKD had another good year.   The Rider made progress and appears to be getting set for the inter net future.

I finished my high school education in Haliburton, a cottage area. Heather discovered cottages as did Lexie.

I posted 70 blogs, got a few comments from all over the world.  Plan to do better this year.

All in all lots of wonderful memories.  Looking forward to 2014.